Gateway85 CID Has a $16.6 Billion Economic Impact on Gwinnett County and the State of Georgia 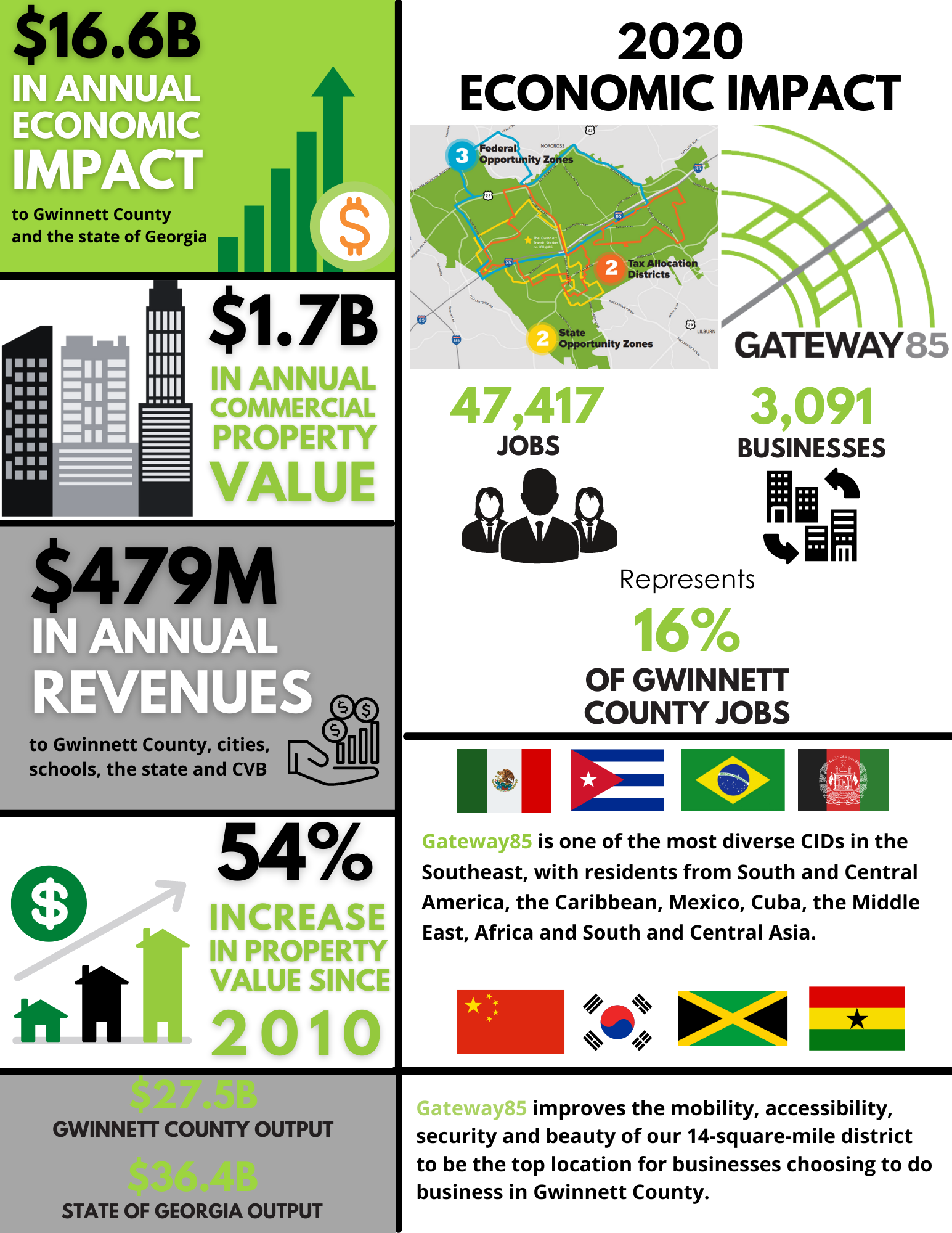 Gateway85 CID Has a $16.6 Billion Economic Impact on Gwinnett County and the State of Georgia and $1.7 Billion in Commercial Property Value

Norcross, GA ‐ November 30, 2021 – As one of the state’s largest Community Improvement Districts, Gateway85 CID announced today that it had a massive annual economic impact of $16.6 billion on the County and the state of Georgia in 2020, in a report prepared by KB Advisory Group.

Highlights of the report stated that within the boundaries of Gateway85 CID there are 3,000 businesses with 47,417 jobs that produce $5.6 billion in payroll and earnings annually – and that those jobs represent 16% of all jobs in Gwinnett County. The area of influence, or the area that extends just beyond Gateway85’s boundaries, has 63,385 jobs and 4,903 businesses.

“As we reflected over the past 15 years since the CID’s founding, we realized it had been over five years since we studied the economic impact of our businesses and CID members on the on the county and state, and honestly, it was incredible,” said Emory Morsberger, executive director – Gateway85 CID.

“With property values at $1.7 billion, and the CID’s continued investment in infrastructure updates, road improvements, landscaping and security, we hope to attract even more high-tech companies and high-end manufacturing businesses as members. In addition, we want to attract more developers interested in redeveloping catalyst sites within the district,” he added. Gateway85 CID also is the only CID in Georgia with both state and federal opportunity zones providing businesses with added incentives to locate within the district.

Gateway85’s district is filled with a variety of businesses from aggregate manufacturers like Vulcan Materials, to beer and wine distributors and entertainment production facilities like Eagle Distributing Company to local restaurants and retailers. The economic activity in the Gateway85 area generated $479 million in annual revenues derived from property, retail sales, liquor and tobacco, hospitality, business license, income and motor vehicle taxes that flow to schools, the county, local municipalities like Norcross and Peachtree Corners, the state and the county visitor’s bureau.

The report’s executive summary also includes information on the CID’s future economic development strategy, including working with the County and other partners to redevelop portions of the 104 acres that the County purchased on the OFS property at I-85 and Jimmy Carter Boulevard in 2018.

Study findings were recently shared with the Gwinnett County Board of Commissioners along with Gateway85’s plans to promote redevelopment, improve transportation options, improve the quality of jobs, and continue improvements to the physical environment.

Since 2006, Gateway85 Community Improvement District is proud to have made the following impacts:

The Gateway85 Community Improvement District is one of the largest CIDs in the state of Georgia. The public-private partnership is funded by commercial property owners in the 14-square mile area, spanning the I-85 corridor in southwest Gwinnett County. Formed in 2005, the formerly named Gwinnett Village CID represents more than 550 owners, accounting for $1.7 billion in commercial property value. Gateway85 succeeds by partnering with Georgia DOT, the Atlanta Regional Commission, Gwinnett County, Norcross and Peachtree Corners. These partnerships have led to over $110 million in improvements since 2006 and are on track to produce another $179 million in progress by 2030. For more information, please visit the website, or connect via Facebook, Twitter, LinkedIn or Instagram.