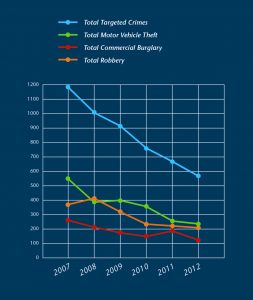 On Tuesday, January 22 the Gwinnett Village Community Improvement District (GVCID),
the largest CID in the state of Georgia, released annual crime statistics showing a fifth consecutive year of reductions in targeted crimes and a decrease in overall crimes within the Gwinnett Village community.

“The fact that we have seen these results coming in year after year proves that community initiatives are paying dividends,” said Chuck Warbington, executive director for the Gwinnett Village CID. “I can’t give enough credit to the law enforcement professionals from Gwinnett County PD and Norcross PD who are working day in and day out to make this a safer community. The strength of those partnerships is truly the reason behind the success we’ve seen here.”

In April 2007, the GVCID board of directors voted unanimously to initiate a Targeted Enforcement Zone (TEZ) program to provide additional security coverage for commercial properties in the district. The program is a multi pronged approach that includes consistent graffiti and litter removal, private security patrols, and additional Norcross police patrols- all funded by the CID. The patrols focus on suspicious activity, vehicles and persons in commercial areas of southwest Gwinnett County. 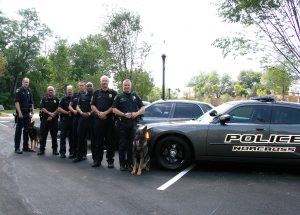 Since the inception of the TEZ program, the targeted crimes have seen significant reductions every year. From 2007 through 2012, total robberies have gone down by 48 percent, total commercial burglaries have seen a drop of 51 percent and motor vehicle thefts have declined by 55 percent.

“This community is safer and consequently more vibrant and attractive for new business and investment than it has ever been,” said Warbington. “We intend to continue our work to ensure that it stays that way.”