Some of the Gwinnett Village CID projects are really beginning to take shape! One of those 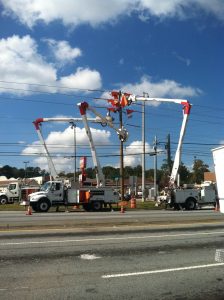 projects is the long-awaited intersection improvements at Jimmy Carter Boulevard and Singleton Road.

In a 2006 Atlanta Regional Commission study, the Jimmy Carter Boulevard/ Singleton Road  Intersection was identified as one of the most dangerous in the region.

The new design will include pedestrian and vehicular safety enhancements, as well as congestion-relief benefits at the heavily traveled intersection.

This project is a perfect example of how CIDs work in bringing funding partners together to implement much-needed transportation enhancements in our community. The project has funding contributions from Gwinnett County, the State Road and Tollway Authority and the Federal Government.