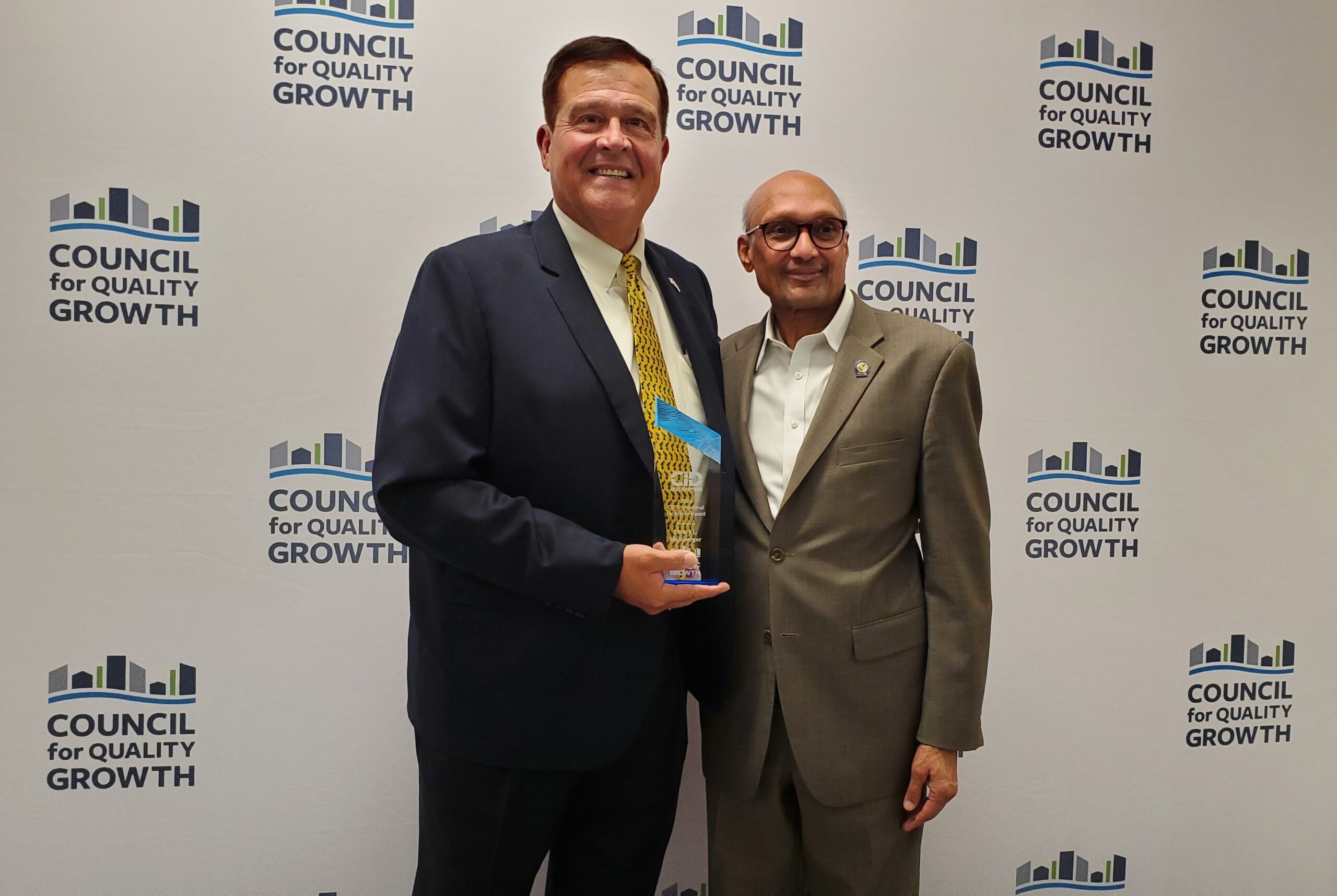 ATLANTA – The Council for Quality Growth held its 13th Annual Community Improvement District (CID) Recognition Reception yesterday evening, November 15, 2022. Over 200 members and partners of the Council, elected officials, CID leadership, and other regional supporters of the CID industry gathered on the rooftop of the Comcast Center at The Battery Atlanta to honor the recipients of this year’s CID awards.

On its 13th year, the Council’s CID Recognition, presented by the Cumberland CID and Georgia Power, acknowledged the work of all our metro Atlanta CIDs and honored two carefully nominated and selected CID leaders that have greatly impacted the region. “CIDs are so valuable in strengthening the unique character of each part of our region,” said Michael E. Paris, President & CEO of the Council for Quality Growth, “and it is by the leadership of those like John and Emory that our CIDs can continue to accelerate the growth and development of metro Atlanta.”

John W. Shern, Retired Vice President of Construction for The Home Depot was presented with the 2022 John Williams CID Leadership Award by David Allman, Owner & Chairman of Regent Partners. Allman was the 2021 recipient of the award and the former Chairman of the Buckhead CID. To the CIDs present, Allman said they are “the connective tissue that just make these communities work so well.”

Shern currently serves as Chairman of the Cumberland CID. Having been a part of its founding board in 1988, Shern is the longest serving board member of a CID in the state of Georgia. He was an integral part of the 1984 legislation that allowed for the creation of community improvement districts in Georgia, and his work has established the precedent for dozens of other CIDs across the state to follow. “I’m incredibly proud of what we’ve done over the last 25 years,” said Shern in his acceptance of the award, “and I’m incredibly proud of how we’ve done it.”

Shern has played an instrumental role in several of the Cumberland CIDs notable transportation projects, including the Cumberland Boulevard Loop, the Kennedy Interchange, and the Cobb Parkway Pedestrian Bridge. During his tenure as Board Chairman, Shern has overseen millions of dollars of investment in Cumberland, creating an estimated $23.6 billion in annual economic impact to Georgia. Kim Menefee, Executive Director of the Cumberland CID, also provided remarks, speaking to the expansive successes of the CID under John Shern’s leadership.

Emory L. Morsberger, Executive Director of the Gateway85 CID and President of the Tucker-Summit CID, was presented with the 2022 CID Professional Excellence Award by Ann Hanlon, the Executive Director of the Perimeter CIDs. Hanlon was the 2021 recipient of the CID Professional Excellence Award and former director of the North Fulton CID. “Emory gets out of bed every morning and tries to do the right thing for his community,” she said, “and he does so with a zest and an energy that the rest of us wish we had.”

Morsberger has a long career serving CIDs and other community revitalization efforts throughout the metro Atlanta region. He’s successfully founded three CIDs, including Gateway85 in 2005, where he served on its board before taking the helm as Executive Director in 2019. He also helped to create the Lilburn CID and the Tucker Summit CID, the latter of which he still serves as President of the Board. “There’s no more gratifying thing than getting a group of people to come together with a common mission,” he said, reflecting on his involvement in either the formation or the expansion of nearly half of the region’s CIDs.

Morsberger led the redevelopment of downtown Lawrenceville, having earned him an induction to the Redevelopment Champion Hall of Fame at last year’s 2021 Metro Atlanta Redevelopment Summit (MARS) Awards. Having served as a former Georgia House Representative, Morsberger also had a hand in the legislation passed for CID creation. In addition to his current roles at the Gateway85 and Tucker Summit CIDs, Morsberger runs his own property management firm in Gwinnett and has recently spearheaded an effort among Atlanta-based Rotary clubs to provide relief and supplies to the war-torn Ukraine.