The Beaver Ruin Road Midblock Crossing was constructed to increase pedestrian safety by offering a more readily available protected place to cross. Prior to midblock construction, signalized intersections were one mile apart on Beaver Ruin Road and many people were risking their safety by crossing in a location without pedestrian safety infrastructure.

The new crossing includes a pedestrian median, which provides a secure place to wait in case walking the entire median at once is not possible. An audible High-Intensity Activated crosswalk (HAWK) beacon was also installed to ensure that drivers and pedestrians are both aware of the pedestrian in the road. This project was funded by a grant the CID was awarded through the Georgia Department of Transportation, with additional funds provided by Gwinnett County DOT and the CID. The CID was responsible for managing all phases of the project. 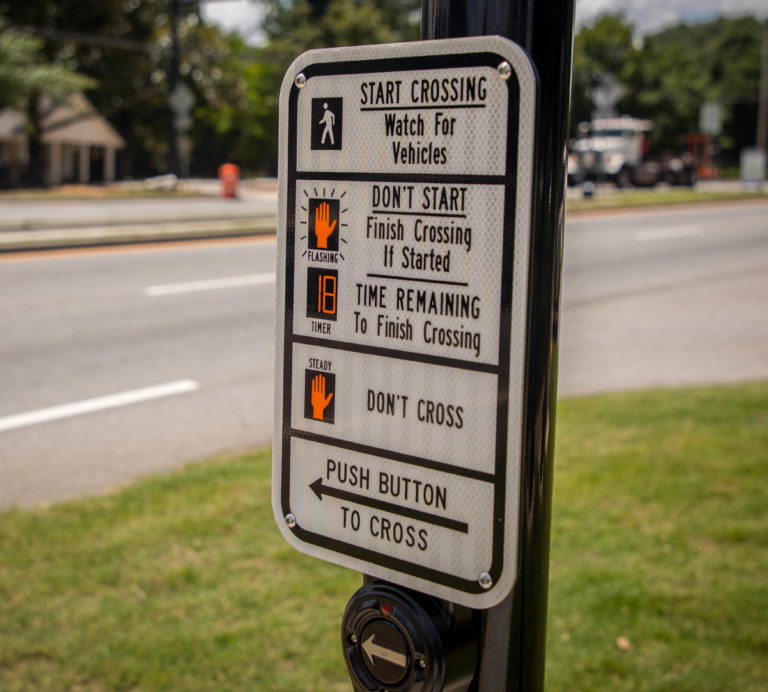 The Community Celebrates the Midblock

WXIA and WSB were there to help cover the event! Check out their coverage below.

On July 16th at 3:00 PM, Timothy Jones blind at birth, walked across Beaver Ruin Road using the newly installed midblock with an audible HAWK Signal system for the first time.

Timothy, who was home-schooled, had a love of music and began to play the piano by ear. He then studied for years and learned classical music largely provided to him in braille from the Library of Congress in Washington. Since then, he has earned a bachelor’s degree in Liberal Arts of Music in Organ from Mercer in Macon. Timothy now wants to obtain his master’s degree in Piano Pedagogy from Georgia State to teach others, especially children, to learn how to play piano through braille.

To travel to and from school independently, it was necessary to use a crosswalk across Beaver Ruin Road. Gateway85 was already underway with the project and, with a special grant from the Georgia DOT and financial assistance from Gwinnett County DOT, the crosswalk was installed. The original plan did not include an audible component but Robert Michener, Gateway85 Director of Operations, worked with Nancy Jones, Timothy’s mother, to add the audible component for an additional investment of $15,000 from Gateway85. The entire project cost was $205,000.

On that muggy Tuesday afternoon, many from the community gathered for the activation of the much-needed crosswalk.  Timothy also celebrated his 26th birthday that day…acknowledging his gratitude for safe passage across Beaver Ruin Road, a route he will take daily as he enters Georgia State for his graduate degree in August.